Another week gone by so time to post another book review.  I'm still posting from the files of Spokane Authors and Self-Publishers.  While this one is fairly short, I'm not going to post additional reviews at this time.  The next one up has a fairly extensive collection of reviews and I don't want to post something that's too unwieldy.
So with out further ado...
Illusions of Magic:
Love and Intrigue in 1933 Chicago 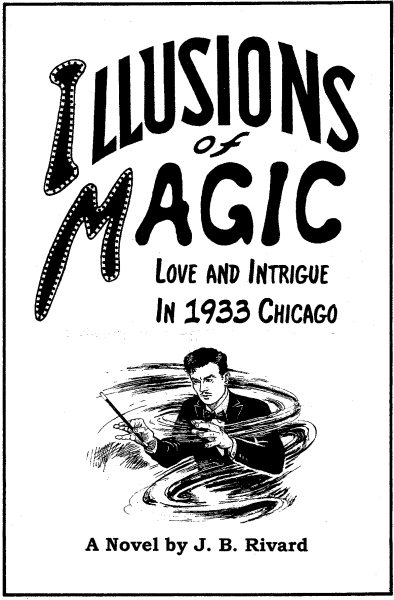 Reviewed by Johanna Urquhart
(Historical Novel Society)
1933.  J. B. Rivard centers part of his novel Illusions of Magic around a true-life and little-known historical incident: an attempted assassination of Franklin D. Roosevelt in Miami in February of 1933.  The assassin, Giuseppe Zangara, had allegedly been trying to shoot Roosevelt when he accidentally shot Chicago Mayor Anton Cermak instead (Cermak later died of his wound).
This incident is part of the dramatic backdrop of Rivard’s fast-paced and punchy novel about struggling professional stage magician Nick Zetner.  The backdrop – and the author’s excellent illustrations throughout – furnishes a good deal of the charm of the book.  Nick Zetner’s adventures, part screwball comedy and part Dashiell Hammett, combine with the richly authentic atmosphere of the setting to create a quick and very enjoyable read that smoothly intermingles Nick’s love life with a challenging case he takes on for a corrupt banker.
The book reads like a breath of fresh air – recommended.

So late last week (Thursday, Friday, and Saturday) I attended the second Connecting Writers with Hollywood Conference, held right here in Spokane.  It was held at the Davenport Hotel in down town Spokane, and that historic site made it worth going, even if nothing else came of the event.  The list of folks who have stayed at the Davenport, or who have visited is impressive to say the least, and includes world famous entertainers, political figures, statesmen, and bonafide royalty.  Not far outside of the conference rooms a display case held items on loan from the Bing Crosby collection, including his pipe.

Anyway, I went to try and get back into the writing and publishing world and to connect with folks in it.  I also went to see if there would be any possiblilty someone might want to make film versions of the Stone Island Sea Stories.  So I learned a lot, met some new friends, and even pitched my books to a couple of folks in the film industry.  No, there isn't a movie deal in the works but both seemed interested.  The first individual I pitched too seems to be more interested in something that has a proven sales record as a book, something that will give them a basis and a reason to risk the expenses needed to make it into a film or films.  She suggested that I might want to find someone who could help me fine tune the stories and hopefully build sales.  The second individual seems to be more interested in taking my ideas developing them for film while boosting book sales.  Anyway he took my card and asked that I contact him later via e-mail.  Did that earlier today.

Whether anything happens or not, it was a fun and educational two and a half days.  I'd imagine that if they hold the event next year, I'll go again.  Sorry, but despite the historical significance of the conference site and the elegance of the establishment, I neglected to take any photos while there.  I did have one of the best cheeseburgers I've ever eaten accompanied by a massive pile of shoestring potatoes so large that I wondered if I'd be able to finish them.  (I did.)

Discovered that by the time the conference ended Saturday evening I was just plain worn out.  In fact I passed on the last event of the day and came home.  The other SASP member who had been riding with me had left earlier as well as she too was getting tired.  And since I had been parking in the hotel parking building I stopped by the front desk to pay and get a pass to open up the gate so I could leave.  Well something was askew with the system so they didn't charge me anything and gave me the ticket so I could leave.  But when I got to the exit gate the ticket didn't work.  Luckily no one was behind me so I was able to back up a bit and sneak into a parking spot reserved for valet parking.  Then it was a quick dash across the street and back to the front desk.  They quickly got me the correct exit ticket and I was on my way.
More next time,
Dave
Collapse