Once again I'm posting reviews of multiple books.  Two of the  three have only one short review, and it turns out that all three are by the same author.  I haven't had a chance to read any of these yet but I look forward to doing so in the future.  They are definitely on my TBR list!  You can find these reviews and information about the author and her books on the Spokane Authors and Self-Publishers web-site.
Dave
The Hat Pin Murders 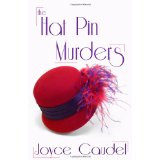 Maggie Coppengee loves her Red Hat Chapter and the “Hatties,” as she calls her friends. Fun loving and committed to having great times, she can’t believe anyone at a Red Hat luncheon would kill her special friend, Mary Reed, and with a hat pin, of all weapons for a killer to use. Maggie becomes the prime suspect and must find the real murderer in order to clear herself.
The Hat Pin Murders is a fun book to read. Joyce Caudel writes in an easy manner as she leads the reader on a trail of discoveries and clues in her search. Along the way Joyce lets us know why the Red Hat Society has become such a popular group.
The Hat Pin Murders is an enjoyable book and was an award winner in the General Fiction category of the USA “Best Books 2011” Awards. It’s available at several Spokane area bookstores, as well as on Amazon.

Reviewed by Esther J. Hildahl
Maggie Coppenger and Mary Reed live in Sommer, Washington, and have been best friends since kindergarten. Mary, a recent widow, only lives a few blocks away from Maggie, and they often do things together. Both enjoy being members of the Red Hat Society, which is all about dressing up in purple, wearing red hats, having fun, and spending time with their friends.
However, things turn tragic at the Red Hat Society Spring meeting, at the Sommerset Hotel, when Maggie finds Mary murdered with a rhinestone hat pin. Maggie and her friends are shocked that Maggie becomes the prime suspect. Therefore, her fellow Hatties, the Mystery Mamas, set out to find the real killer.
But who would want to kill Mary? Could it be Edith, Mary's neighbor, who pushed her and threatened to do her harm after an incident involving Edith's dog? Darlene, Mary's unfriendly, greedy stepdaughter? The mystery woman at the club? Or, could it be the driver of the black Mercedes who tried to run Maggie and her friend Jess off the road?
When the killer strikes again, this time attacking Marie Reader, a member of the Singing Sisters, and others at the Red Hats fashion show at the mall, Maggie and her friends come closer to having their questions answered.
I thoroughly enjoyed reading this book, the first of Caudel's Red Hat Mystery books, and learning about the Red Hat Society. Caudel is a talented writer who spins a great mystery with numerous twists and turns. The reader is never bored. Her characters and settings are well-defined and interesting. I recommend this book to anyone who likes to read a good story that is a page turner and has a very satisfying ending.
Available in several Spokane area bookstores and on Amazon.

Reviewed by Kate Poitevin
The Hat Pin Murders is a delightful cozy murder mystery. Ms. Caudel has created a group of interesting characters, ladies “of a certain age” who are members of The Red Hat Society. Excitement abounds as they prepare for an event with all the area groups. Sadly, it wouldn’t be a murder mystery without a murder. When one of their own is killed, it rattles her friends to the core. No one would really expect them to sit by and wait for the police to do their jobs, especially the prime suspect. Then the story takes a turn. We find ourselves immersed in mob activities. I’ve read many books of this genre and am pretty good at guessing where it’s going to end. This one artfully twisted and turned until I was totally clueless and I couldn’t venture a guess at all. The ending was certainly not on my radar! Well, done! 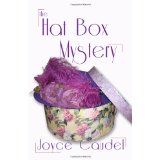 Reviewed by Robert G. Hildahl
Rachel Davis, a member of the Mystery Mama's Red Hat Book Club, awoke around three in the morning to find three masked men in her kitchen. When she confronted them, they were surprised that she was there, for they only broke into homes where the owners were not home. When one of the men got rough with her, she called Jake, her Great Dane dog. Jake ran into the kitchen and attacked the man, clamping his big teeth on the man's arm. The other two men ran off while Rachel called the police.
When Jake is wounded in a drive by shooting a few days later, Rachel wonders if the same masked men that broke into her house could be trying to get even with her and her dog.
Thus, begins another great story by Joyce Caudel. I recommend this book to anyone who likes a good mystery with many interesting characters, such as Milo Jenkins, Rachel's wealthy uncle. It has a good ending and a good lesson in humanity and caring for those who have very little to nothing.
Available at several Spokane bookstores, Amazon, and on Kindle.
A Hat to Die For 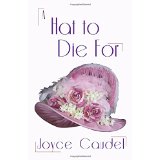 A Hat to Die For is Caudel's third mystery novel involving the Red Hat Society and the good people of their town. Like her other two novels, this one is just as exciting and interesting to read.
Chancy Goodnight is a bestselling author. She writes mystery novels. One day, she receives some red roses and a package with no return address on it. Since she has been receiving threatening phone calls, she tells the delivery boy to take it back. Later she finds out that inside the package was a dead rat!
When Chancy throws a party at her home for all her friends, it is interrupted by a dead man found in one of her flower beds. And the next day, she discovers that her granddaughter, Brandy, is missing.
This book tells a very good story about changing your life for the better and finding forgiveness from new friends because of the changes you have made. I recommend this book to anyone who likes a good mystery.
Available in several Spokane area bookstores and on Amazon.

So as most of you know, I had hernia surgery about two and a half weeks ago.  I've healed to the point that I usually don't realize it anymore.  Very little swelling and the incision is closing up nicely.  Had a follow up visit with the doctor last week and the medical folks are happy with the process.  They did remind me that internally may take a bit longer to knit back together than does the external side of things.  And that puts me into the current state where I'm itching to get stuff done but have to remind myself that I'm still under restrictions for how much I can lift and that I need to watch out and not undo all of their skilled work on the internal structures of my abdomen.  Most of the time I feel like everything is just fine and it is so tempting to just "go for it."

I did mow the lawn a few days ago, but I took it really slow and kept the proverbial eyeout for any sudden discomfort of strain.  Seemed to go okay,although I was a little sore the next day.  Soreness more of a result of using muscles I hadn't used in a couple of weeks, rather than as a result of any strain on the surgical site.  If I let the yard go for two weeks plus as I did this last time,the next time I mow shouldn't be any sort of problem.

So last Friday a fellow member of Spokane Authors and Self-Publishers called and asked if I wanted to be interviewed.  It seems she has been doing a monthly "show" at the "Living Stage" and a local Hotel RL, part of the Red Lion group of hotels.  They allow artists, authors, musicians and others to appear on stage,  record it and make it available throughout the hotel.  Plus I understand the shows are available at other hotels in the chain.  So being mindful of the need for publicity, I agreed.  Sunday evening Eva accompanied me, Jessica met us there, and I was interviewed by Kate.  For something that was unrehearsed, for which I had not really prepared, it went rather well.  Kate has been asked by hotel management to do something along those lines on a monthly basis.  I think she would like to feature a different member of Spokane Authors or other local authors each time.  I understand the Hotel RL also makes these "shows" available on You-Tube.  If I find the link I just might post it, in case anyone is interested.  Of course I might watch it and decide I made a complete idiot out of myself... and thus you would have to hunt it down yourself in order to see it.

Later this week I'll be attending a conference right here in Spokane.  It's not the traditional writers conference, but one designed to bring writers, screenwriters, film production folks and the like together.  It's called, Connecting Writers with Hollywood and takes place Thursday afternoon and all day Friday and Saturday.  (June 7, 8, & 9)  I decided to go to try and get back into the mainstream of writing and publishing, and also with the thought that someone might decide the Stone Island Sea Stories would make a good movie, movies, or perhaps a series.  Never hurts to try!

Beyond that I've been invited to take part in a Northwest Author Night at Coeur d' Alene's Well-Read Moose on Monday the18th of June.  I will be sharing the spotlight with another local author by the name of Timothy David Jones.  He's the author of a novel entitled Booth.  We've never met, but hopefully we'll each help draw folks in to the store for the other.  And the store is also a coffee and wine bar, so hopefully will be a relaxing evening.  It runs from 6 to 7:30 pm. 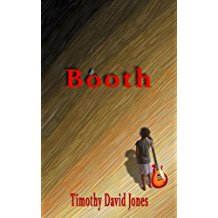 Here's the cover of his book!

Since I'm going to the Connecting Writers with Hollywood Conference, I won't be going to this month's Spokane Authors and Self-Publishers meeting.  (Time conflict!)  But if anyone is interested in that event they are going to have an open mic session in which members and quite possibly guests will have a chance to read a bit  (5 minutes or so) of their work.  The group decided on an open mic session as quite possibly several members might be going to the aforementioned conference.

So that should bring you up to date on what's going on in my writing/publishing/being an author world.
Dave
Collapse