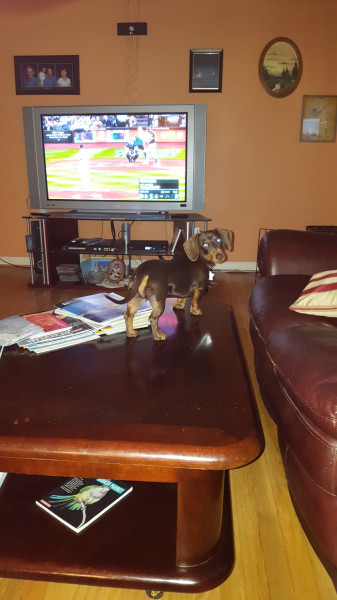 (Coco's short little Dachshund legs actually propelled him on to the coffee table the other day.  Pic has nothing to do with the post, but I wanted to include a picture of something.)

Not sure if I've mentioned it, but the surgery I had last fall for a bowel resection/colon cancer had a fairly common result.  I ended up with an hernia.  A portion of the incision/opening they made to do the resection work evidently didn't close up completely and portions of my interior anatomy began working their way through the opening.  As time went on, the opening got larger and more and more of what should have been contained within began pushing through and creating a bit of a bulge.  So early today, and I might add, very early today, Eva drove me to the hospital and the mythical/medical "they" mad the necessary repairs.  So I'm home now, taking it easy and looking forward to being completely healed in a few weeks.

Right now I haven't taken any sort of pain meds, other than what they gave me while in the recovery room.  My hope is that I won't need to take any.  I don't mind a bit of discomfort as it helps remind me not to overdue it and cause complications.  If it is like my previous hernia surgery (Just about ten years ago to the day) I'm okay as long as I'm in one position... standing, siting, or lying down.  It was only when transisitioning from one position to another that I felt any real discomfort.  And as long as I moved between positions with forethought and planning, it wasn't too bad.  That time before I did have Eva go to the pharmacy and fill the prescription for pain medication.  I took a couple doses of it but didn't like the way I felt.  I was dopey feeling and it also said not to drink alcohol, and as most of you know, I enjoy my beer/wine/booze.  I decided not to take the meds unless I really need to, and get back to my normal routine of food and drink as soon as I could.  Suprisingly, when I had my bowel surgery last fall, they did not prescribe any pain meds.  But then I was not discharged the same day.  Then, I remained in the hospital for two days following the procedure and I was given various pain meds and other things at intervals while there.

To recap a bit, the actual healing process of last falls more intensive procedure seemed to go well.  It was only that I developed a bacterial infection of some sort... what I think they call "c. diff" or similar, that played havoc with the progress.  Didn't want to eat or drink anything... and most of what I did consume passed right through me like soup through a sieve.

So I've got a month or so now where my activities will be limited.  Maybe I'll bet a chance to get back to some serious writing and make some progress on the third Stone Island Sea Story.  Most of what I have completed of that was accomplished a decade ago when I was recovering from my first hernia repair.  After that, things seem to have bogged down or I've been derailed by other projects, and I've made very little process.

Anyway, getting up and going in for the surgery today almost equates with getting up and going to work.  When I scheduled the procedure a couple of weeks ago, I scheduled it so I would show up at 0700 hrs, with the actual surgery to take place at around 0900 hrs.  Yesterday the hospital called saying I needed to be there at 0500 hrs, and the procedure would be sometime around 0700 hrs.  That meant getting up at or before 0400 hrs so I could get the shower they wanted me to have prior to the operation and to allow for time to transit between home and the hospital.  (When I was working, for the majority of time on the last job, I had to be to work at 0400hrs, which meant being up at or before 0300 hrs.)  Today wasn't as bad as work, but when a person is retired and considers it early to be up by 0800, it it early!  And Eva worked until 2200hrs last night so she was a bit groggy on the way there.

In the near future,hope to finish reading Larry Danek's I'm the Ghost in this Body and will then write a review.  Yeah I know I've been at it for quite a while.  Seems I read a bit and then don't get back to it for a while.  Getting close to the end so hopefully will finish in the next few days.

Enough of my rambling, I think.  More, although not necessarily on the same topics, in the near future.
Dave
Collapse