And we seem to be right on track, having posted the last review about a week ago.  That's what I'm trying to do, anyway.  This week we have two books reviewed, as all reviews are fairly short.  Once again these are from the files of reviews for Spokane Authors and Self-Publishers, with either the books or the reviews or both having been written by members or recent members of that organization.
Exposure

Reviewed by Robert G. Hildahl
Another great book by Col. Chuck Lehman. Using his survival training skills, he has successfully created an exciting suspense-filled thriller and a page turner.
The story begins with Cal, a pilot, being forced to crash land his plane into the tree tops of a Canadian forest. Now he and his photojournalist, Jillian, must not only survive in the woods but must also avoid being shot by a mysterious stranger who is shooting at them. With a little romance mixed in, Exposure is a great read.

I don’t usually read thrillers but this looked like it might be a good read so I decided to give it a shot. I was not disappointed. A routine aerial photo mission for a mining company turns deadly when the plane carrying former U. S. Air Force pilot Cal Cunningham and risk-taking photojournalist, Jill Adams is forced down in the wilderness of northern Canada. They soon discover that they have to deal with the wilderness but also a Russian sniper and a Mexican drug cartel. All of Cal’s survival training and his resourcefulness are put to use as Cal and Jill devise ways to survive both nature and those out to kill them. It the process Cal and Jill also find themselves relying on prayer and on each other in ways that rekindle faith and love in lives that had lost both somewhere in the past. 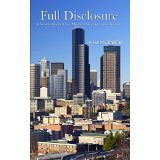 Reviewed by Esther J. Hildahl
Jenny Scott is happily married to her husband, Greg. She has a dream job at Taylor Myers, a Seattle investments firm, and is about to have her first initial public offering (IPO). Everything is perfect. Or is it?
She can't help but think about her friend Cabot McAvoy's warning to be cautious when dealing with others in the firm and to not always believe what she's told. When she discovers someone has gone through her desk, looked at some of her files, and later discovers a mysterious file on her computer that she can't open, her suspicion grows that she is being set up to take the fall for some sinister happenings at the firm.
With the help of her assistant, Alex, she takes on the unscrupulous, greedy bad characters, who she discovers have already murdered two people that got in their way. After a spine-tingling office break-in and a harrowing car chase, they eventually find out what has "really" been going on.
Helen Christine is a fine writer and spins a great story of greed, dishonesty, corruption, and murder in the securities industry. It has a surprising and satisfying ending. The characters are well-defined and interesting. I enjoyed reading this book, and I recommend it to anyone who likes to read a story that is both a thriller and a page turner.
Available from Amazon.
Collapse