About that time of the week again.  Here's the next review as found on the Spokane Authors and Self-Publishers' web-site. 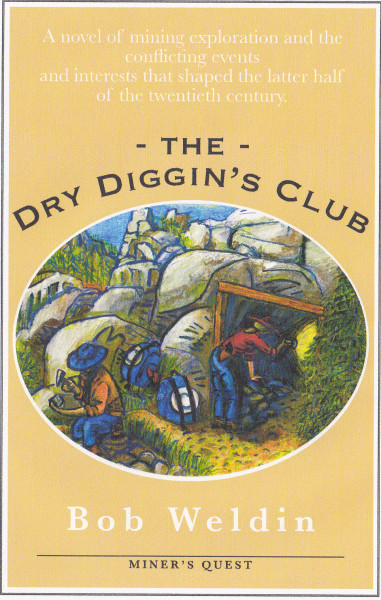 Growing up in a ranching and mining Montana family, Sara Mullins is drawn into geological exploration and mine engineering.  After college she becomes one of the first women to work in the male dominated field.  She does extended field work in the Idaho wilderness and then in Alaska.  While there, she successfully drives off a marauding grizzly and meets who she believes is the man of her dreams.  Closer to home, she becomes a member of the Dry Diggin’s Club, a group of mining professionals seeking to better their position.  Along the way she discovers some unique advantages of aircraft equipped with auto-pilots, learns that not everyone can be trusted, and foils an attempt at extortion.
This proved to be an entertaining and enjoyable read.  In large part the story is set in the local region, with much of the story taking place in Coeur d’Alene or Spokane.  One scene takes place at this reviewer’s current place of employment, and that establishment is mentioned in another.  Although it does play a part in the story, it is surprising that the Dry Diggin’s Club doesn’t play a larger more central role throughout the book.
ISBN 978-0-578-10682-3 was published by Miner’s Quest and retails for $19.95.

Weldin has written a very exciting novel about mining and searching for the mother lode. It makes you want to go backpacking with a miner's pick and search for minerals and gold deposits.
In many ways this book is similar in excitement to a Clive Cussler novel, but without all the bad guys shooting everybody. The Dry Diggin's Club is a real page turner with romance and adventure that keeps you interested and excited right to the end.
I highly recommend reading this well-written novel.

Bob Weldin’s vast mining expertise and experience shine through as he weaves this captivating tale of exciting discoveries in romance and in other treasures.  You’ll learn a ton about mineralogy while being engrossed in the many dramatic happenings of the Mullins family.  And you’ll experience two generations of Mullins’ – from the end of World War II through the 1960’s.  Primarily set in Montana, Sara Mulllins attempts to enter a profession dominated by men.  As she is doing this she finds herself involved with the Dry Diggins’ Club and romantically involved with two men, one of whom turns out to be a scoundrel.  With the help of her brother and the man who may become her soul-mate (Brad), Sara gains sweet revenge – in a unique way – on the scoundrel.
The book ends with Sara flying off with Brad.  Will they find true happiness – and will they find the Lost Sheepeaters Mine?
I hope Mr. Weldin writes a sequel so I can find out.  Perhaps, his next book will take us through the end of the last century and into the present.  He left me wanting more.
Collapse