About a week since I last posted a review here.  Today we have two more (they are fairly short) from the reviews posted to the Spokane Authors and Self-Publishers' web-site.  I've also decided to start providing links to where you can find reviewed books on-line... just in case you are interested.  You are also invited to visit the Spokane Authors and Self-Publisher's web-site (linked above) and go to the "Members" page and learn more about the authors and the reviewers.  (As it turns out, this installment of the Weekly Book Review features books by and reviews by current members of the organization.)
Dave
De-pop 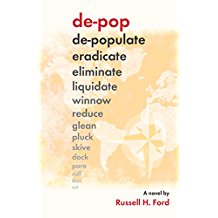 Reviewed by D. Andrew McChesney
What if those folks secretly in charge of everything thought that controlling or limiting the population would be the best for everybody?  What if others opposed that idea?  Bring in others supporting the idea of population control and put them in conflict with those who are against it.
This is the premise of Russell Ford’s first novel.  Open the cover and step into a world of black ops, church intervention on a not so holy level, and the dangerous life of agent Neah Bey.  It reads like a thriller because it is.  Well written, it is difficult to put down.  Despite the deep sometimes disturbing premise of the story, there is an entertaining, somewhat lighter air to it.  Unique is that many of the characters are named for cities, towns, and other geographical locations in the Pacific Northwest.  Being a resident of that region, this reviewer soon caught on to the author’s method of creating character names and looked forward to see what little town or feature would be mentioned next.
This was an intense and interesting read and I look forward to the author’s next offering.


De-pop is available on Amazon Kindle or as a paperback. 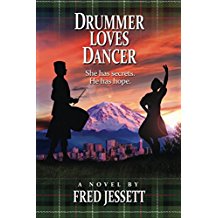 Boy meets girl; boy falls in love with girl. This story is a sharp reminder of what life is like when we question the meaning of love, innocence, racism, commitment, and our faith in God. These are the large issues that preoccupy us when all is before us, irrevocable decisions haven’t yet been made, and we don’t quite know who we are.
Lad MacAdam, a drummer in a Seattle-based Scottish piping band, falls in the thrall of instant attraction to Ginger DeForest, a dancer and beautiful young woman of mystery from New York. Lad really does put Ginger on that pedestal, seeing her as far above him. Gradually, as their relationship deepens, they reveal their true natures, mourn their losses, and truly fall in love. But then the writer adds a twist.
Since I grew up in Seattle, I was entranced by the vivid settings from the very first page, as they reminded me of those days long ago, when I was a child, swam at Green Lake, and watched the Sea-Fair parade in awe. Lad and Ginger, dubbed Drummer and Dancer throughout, come to life with youthful angst, and the story resonates throughout with a celebration of life.

Coco is growing up and getting bigger each day.  (He's still small compared to many dogs, but bigger than he was.)  Over time we've had to set certain things up higher to prevent his reaching and destroying them.  The kitchen trash can now sits on an old stool my dad made decades ago.  We've had to fence off one of Eva's house plants and today I slid the paper recyling can behind the barricade as well.  However, the most telling and some what dubious milestone came this morning when Eva hollered, "Hey!  This crazy dog is drinking from the toilet bowl!"  I suppose we never thought of that, with him being a dachshund, and a mini dachshund at that.  But as he grows longer, he is able to reach higher when he stands on his hind legs. 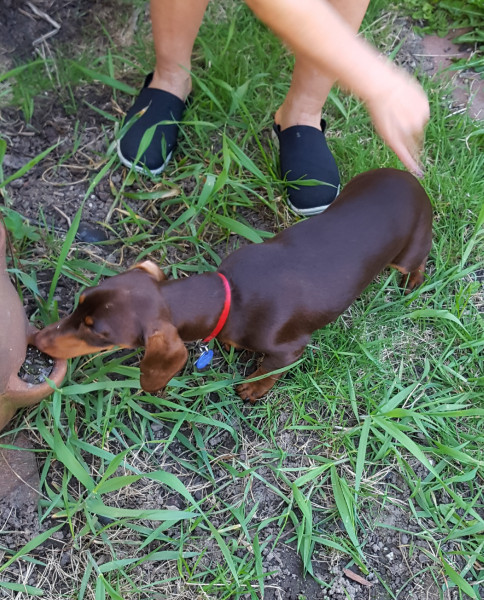 Coco exploring the back yard. 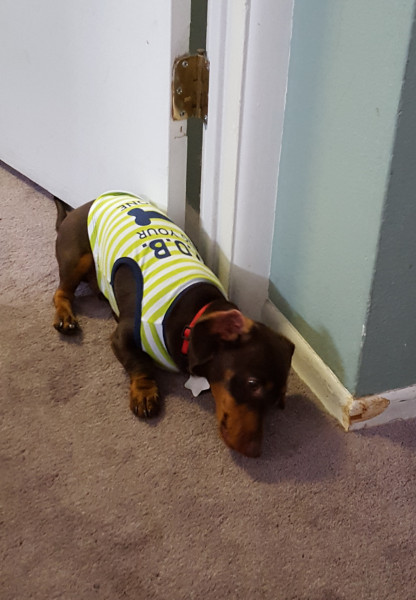 Coco showing off his new shirt.  "BYOB or Bring Your Own Bone."  Also visible, some of his chewing handiwork at the corner of the mop board.  We've tried painting such spots with cayenne pepper solution.  Seems to deter him a little. 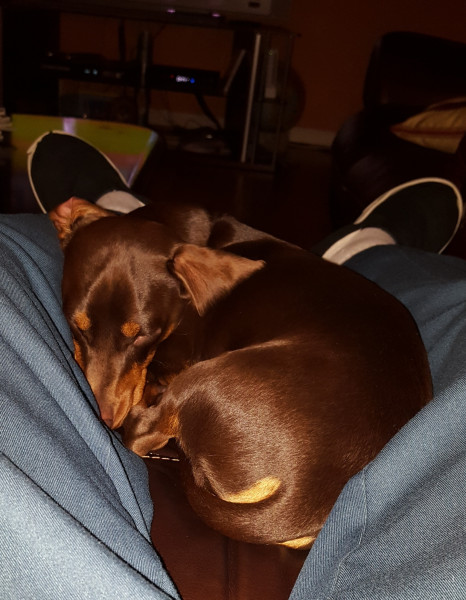 Last night he fell asleep with me on the recliner.

Have a good rest of the week, everybody!
Dave
Collapse