Towards the end of last week I finished reading The Adventurists by fellow Spokane Authors and Self-Publishers member Bob Weldin.  I wrote a review, thinking it would be the first to post on the group's web-site.  But as i was processing it I discovered a collection of reviews for it in the files.  I added mine and will soon have it posted to the SASP web-site.  In the meantime I'll post it here.... it should have been one of the very first posted as I began this run through the reviews on the site.  (Currently reading I Am the Ghost In This Body by another SASP member... Larry Danek.)
The Adventurists 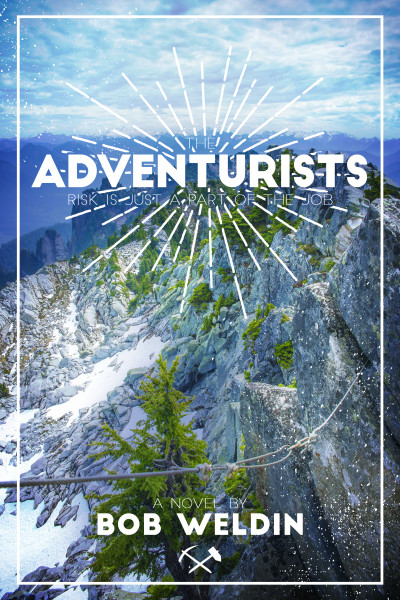 Another great story by Bob Weldin. Sara Mullins, the main character and also from Weldin's first book, is an exploration geologist. She and her soon-to-be husband, Brad, travel into the Idaho wilderness on horseback, searching for old mines, lost gems, and treasure. Sometimes, they have to use small planes to get in and out of these remote locations. Throw in a South American drug cartel, trying  to get even for having their drug stash destroyed, and you have quite an adventure.
Weldin uses his knowledge as a former geologist, adventurer, and mining engineer to create this exciting story. The Adventurists should be read by all who like adventure stories and want to learn more about the dangers of mining.

When exploration geologist Brad O’Connor investigates an old underground mine in the North Cascades on the Washington/Canadian border, he finds more than he bargains for: trouble, serious, international trouble. Later, he meets up with his fiancě, fellow geologist, Sara Mullins, to take an assignment in the Salmon River Mountains of central Idaho. The problem is, trouble follows them.
The Adventurists is rich with mining, gems and mineral information. The story takes place in 1967, before conveniences such as GPS, cell phones or laptops exist.           In addition, small plane and helicopter use adds to the story’s adventure, as does the use of horses to get to dense wilderness areas. When all else fails, Sara’s rock climbing experience comes into play for those hard-to-access mineral deposits.
Author Bob Weldin, a former mining engineer for the US Bureau of Mines, writes from experience about the logistics of mining. His creative mind fills in the rest. The Adventurists, Weldin’s second novel, is a sequel to The Dry Diggin’s Club.

Reviewed by Amazon Customer (Otto Schoumacer)
An outdoor adventure mystery 4.0 out of 5 stars

In The Adventurists, Bob Weldin draws from his own life’s experience to create a griping story of wilderness adventure that takes the reader into the wilds of Idaho to confront dangers presented not only by nature, but also by men with evil intent. In Sara Mullins, Weldin creates a character as alluring as she is tough and capable. Sara is a geologist, trained and experienced at wilderness work, but on this assignment, she and her partner, Brad, are stalked by a murderous assassin in a complex web of intrigue and danger involving airplanes, underground mines, drugs, guns and mysterious people.

Reviewed by D. Andrew McChesney
Exploring wilderness areas searching for profitable mineral deposits and evaluating old mines for renewed production is risky enough without contending with a South American drug cartel.
Investigating an old mine near the U. S.-Canadian border, Brad O'Conner and his partner discover it is being used to hide large supplies of drugs.  Barely escaping the smugglers, they vow to never talk about what they have seen.  When the old mine mysteriously blows up shortly thereafter, Brad realizes that he, his partner, and most importantly, Sara Mullins, his love interest and fellow geologist are in danger.  Provided FBI protection, Brad and Sara begin exploration of mineral deposits and mining claims in a large wilderness area in Idaho.  They are aided by friends living in the local area, family members with the controlling interest in a fly-in only recreation ranch, and members of associated government agencies.  All the while they are forced to keep an eye out for members of the cartel who are seeking revenge for the destruction of their drug supply.
Besides being an exciting and fast-paced thriller, The Adventurists contains large doses of outdoor adventure, a proportional serving of romance, and a bit of geological and mining education.  Taking place in the 1960s, it seems odd to us that the characters are in the wilds without cellphones or internet capability.  They have to find an established phone or two-way radio in order to contact anyone.
The story is well written and proves difficult to put down.  As the sequel to The Dry Diggin's Club, it completes a story the author originally began in hopes of detailing his career and experiences as an exploration geologist and mining engineer.
Collapse