Continuing down the list of book reviews on the Spokane Authors and Self-Publishers' web-site, we come to...
Book All the Teachers:
An Irreverent Ride Through Middle School 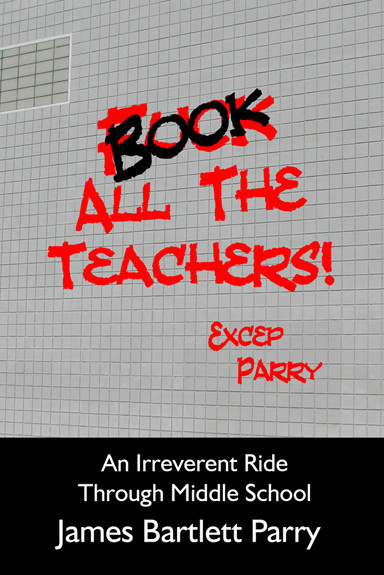 Reviewed by D. Andrew McChesney
James Parry spent the majority of his career in education teaching middle school students in Spokane, Washington.  The fact that he survived and was able to write about his experiences is testament to his fortitude.  From the obviously manufactured page of “blurbs” concerning the book, ie., “Steinbeck, Hemingway, Faulkner, and, now, Parry.  A remarkable book: dazzling.  James Parry is a treasure.  (Signed) James Parry, Author,” and, “This book better sell after all the time you’ve spent on it.  (Signed) Lynda Parry, Author’s Wife,” one is immersed in the hilarity and hi-jinks that is middle school.  Even the title, Book All the Teachers was inspired by a true incident.  Mr. Parry arrived a school one morning to find that someone had spray painted, “(Expletive Deleted) All the Teacher Excep Parry” on the wall.  As it would be sometime before a pressure washer could be obtained to remove the offending language, the custodian used his own spray paint to change the obscenity to “book.”
While Book All the Teachers is an over the top hilarious look at Middle School, it is also the story of one man’s dedication to making a difference in the lives of his students.  That dedication never faltered during the entire span of James Parry’s teaching career. A must read for those who taught, attended, or want to know the truth about middle school life.
Book All the Teachers, ISBN 978-1-936178-00-1, was published by Gray Dog Press, and lists for $14.95.  It is available through Gray Dog Press (www.graydogpress.com), Spokane area book stores, and at (www.amazon.com).

Book All The Teachers! is a true, educational, often humorous story that depicts the ups and downs of all those involved in a certain middle school in Spokane, Washington. It's told by the author whose teaching career spanned 35 years, including five spent tutoring kids that had been  suspended or expelled from school.
As a former teacher, I really enjoyed reading this book; wondering about the title and having it humorously explained in chapter one; reading the creative front pages "Here's what they're saying about Book All The Teachers!" written by the author, his friends??, and his wife--very funny stuff; and the "Warning" page--again, very funny.
Parry is a gifted writer who knows how to bring his characters and settings to life. This story is well constructed, fast paced, and a real page turner.
Everybody who cares or has ever had an opinion on our school system or its teachers must read Book All The Teachers! to truly understand what it's really like to be on the "ground" level of teaching in a middle school.

Parry gives the reader an insider’s look at life as a middle school teacher, and it’s not what you might expect.  Any teacher who can spend 30 years trying to implant information in the brains of children who have the mistaken idea they are adults and already know it all, deserves a medal or a complimentary stay at Eastern State Mental Hospital, or both.  Parry got neither, but he did get to know that he impacted the lives of at least a few of his students in a positive way.  I think I would have liked to have had Parry as a teacher.  Who knows?  I might have even developed an interest in history.  Excellent autobiography.
Available at Gray Dog Press or at local Spokane book stores.

I thoroughly enjoyed Book All the Teachers! Mr. Parry has given us a window into the world of teachers. When I was in middle school, teachers were mysterious beings that must have lived at the school, and it never occurred to me that they had a life that didn’t revolve around us.  I would walk slowly past the teacher’s room, hoping to catch a glimpse of what went on in there. After all these years, I finally know. I never would have believed it then.
I laughed all the way through the book, but there were also sad moments about the struggles of some of his students in their home lives. I was glad that the book followed Daniel and Holly to a satisfying conclusion, as I had become invested in their lives.
I only wish that Mr. Parry had been my grandchildren’s teacher, the youngest starts middle school this year. I wish he had been my children’s teacher. Really, if he weren’t too young, I’d wish he’d been my teacher!
Collapse