So today we celebrate Easter as well as April Fool's Day.  I got to wondering... if, as I understand, April 1st was once New Year's Day, would it have been possible to have two Easters in the same calendar year?  Could it have been in April one year, and the next season, in March, effectively giving two in one year?

Starting pitcher for the Mariners yesterday was James Paxton, who is from Canada.  Instead of the usual "K" cards fans wave to indicate strike outs, the crowd was provided with "EH" cards.... playing upon our Canadian neighbors' characteristic statement ending expression.  However, every time I see "eh" I have to remind myself what it represents, as my mind does not interpret it as something rhyming with "HAY" or "OKAY"  My mind wants so see and pronounce it as something matching "Meth", "Beth", or "Seth."  Seems to me it should be "Ae" or something. Maybe even "Ay."  Assuming of course that "aye" is pronounced "eye"...  Just one of those oddities of the English language, and perhaps regional or national variations thereof.

BTW, Paxton, in honor of his Canadian heritage is nicknamed "The Big Maple!"

Probably have about ten minutes left in order to finish up Bob Weldin's The Adventurists.  Maybe later today or tomorrow.

Busy week ahead.  Tuesday have Spokane Authors and Self-Publishers Board Meeting.  Wednesday I'll need to get a blood draw for an upcoming Doctor visit, and on Thursday we have the actual SASP meeting.  May not sound like a lot to many of you, but now that I'm retired, more than one event a week means it's a busy one.  The week after might qualify as a busy one as well.  Doctor's appt on Monday and a routine Dental visit on Wednesday.  And sometime over the next week or so we'll be going to get out taxes done for the year. 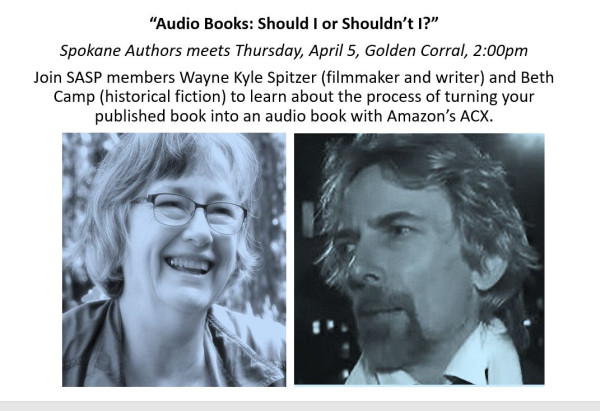 That's all for now... more next time.
Dave
Collapse