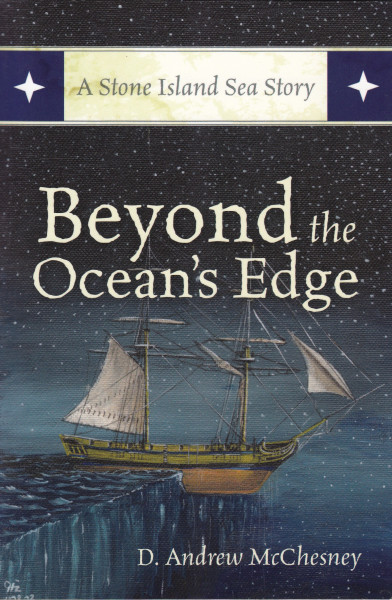 I had never been a fan of books on naval history nor of fantasy… until now.  D. Andrew McChesney has made me a believer.   Beyond the Ocean’s Edge is an extremely well-written, fascinating tale about the good ship, Island Expedition, its captain, Edward Pierce, and their amazing adventures.  This book, my friend, is the work of a professional author – as if Tolkien and Michener had collaborated.  McChesney has excellent command of the English language and takes you on an adventure that you’ll have a tough time pulling away from.  It has just the right amount – and at the right times – of excitement.  It’s beautifully paced writing.  And he does what all good fantasy writers do:  He makes the unbelievable, believable.
Beyond the Ocean’s Edge is set at the beginning of the nineteen century just after England and France have agreed to an uneasy peace.  Pierce and company set sail toward an island that does not appear on any map; it is found only in legend.  They overcome many obstacles, including a ferocious sea battle, as they zigzag their way there.  And I’d best not give away any additional parts of the story.
I was all geared-up for a fantastic ending that would blow me away, but then I remembered that this book is Part I of the Stone Island Sea Stories, so I’ll have to wait till I’ve finished the last in the series for that fantastic ending.  But his writing has left me wanting more.  I’m very anxious for that second book to appear.  And the third.
If you like a well-written naval history with cannon fire and a little fantasy thrown in, you’re gonna love Beyond the Ocean’s Edge (and, I’m sure, the entire series).

Beyond the Ocean's Edge is a very exciting sea story that takes place around the 1800s. It's about Edward Pierce, a young British Navy Lieutenant, who is given command of a sailing vessel to go in search of a legendary island.
He and his crew have many adventures trying to find this island and their lives change dramatically along the way.
Beyond the Ocean's Edge is so well written by McChesney that it keeps you wanting to read every chance you get. As I finished the book, it left me with one question--"When is the sequel coming out?"

Mr. McChesney has a talent for putting his reader in the moment. From the first pages that put me in the middle of a battle at sea, I felt like I was part of the tale.
Written with a mix of action and character development, the story moves along and makes it hard to put down. I loved, or hated, his characters and my heart pounded as they fought their way through storms and skirmishes. It melted at interjections of romance and tapped away in excitement as they found a new world.
The end leaves you wanting more and luckily I have the second book and was able to read on. I would suggest that anyone who purchases Beyond the Ocean’s Edge should go ahead and get Sailing Dangerous Waters so you don’t have to wait for shipping time.

McChesney instantaneously transports the reader back in space and time to the deck of the Theadora in the year 1802. She is a British sailing ship about to do battle with the French, and hero Edward Pierce leads a boarding crew to victory. McChesney's use of nautical terms soon creeps into your own vocabulary, and his descriptions can draw you into the belief that you can smell the salt air and feel the ship roll with the waves beneath your feet. Then the real story begins. After a short stint on land, newly commissioned Captain Pierce and his fine crew set off with a group of would-be colonists in search of the uncharted Stone Island. The quest takes them further from home than they could have imagined, and Pierce even more distant from Evangeline, the woman he loves. The first of a series, Beyond The Ocean's Edge will sail you beyond the charted seas and into a fantastic adventure.

Beyond the Ocean’s Edge effectively recreates that time in the early 19th Century when Britain ruled the seas. McChesney’s seamanship shows through with impeccable knowledge of the daily routines of men at sea, the storms, the battles, and the very rigid class boundaries that separated everyday sailors from officers.
We follow Edward Pierce, at first a third lieutenant of humble beginnings, as he seeks to improve his skills and as he searches for his brothers who had earlier been impressed into service. Throughout the first half of the book, Pierce seems balanced between two possible worlds, the life at sea and the life on land.
Those two worlds become more tangible (and more fantastic) in the second half of the book. At the end of the Napoleonic War when many sailors were dismissed from service, Pierce has an amazing opportunity to sail a new ship to a mysterious island far from all he knows – except that the voyage will take him back to his first love, the sea.
Pierce’s integrity and inner conflicts, his doubts and hopes, his yearning for a relationship, even scenes that reveal him as demanding and irascible, add depth to his quest as he confronts very different cultures and becomes a well-respected commanding officer. A rewarding read well-grounded in history that will require Book 2 to fully resolve the issues raised in Book 1.
*****
In exchange, I've reviewed many of these individual's books as well.  You can find my reviews on the SASP web-site or on my own.   Look under the "Other" button.

As I write what are predominately Age of Sail stories, it is logical that I know or learn and research as much as I can in order to be authentic in what I write.  I'm sure that most every Age of Sail enthusiast is aware of the following, but I thought I'd try to organize it enough to put it down.  Hence...

The Numbers Game During the Age of Sail 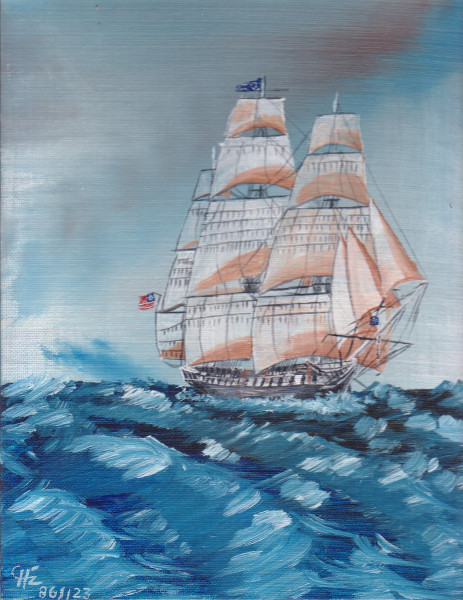 "All Plain Sail"  My painting of a typical United States Navy frigate in the early 19th century.  Perhaps it is the fictional USS Delaware from C. S. Forester's The Captain from Connecticut
During the Age of Sail, warships were ranked and identified by the number of guns they carried, but ships rarely carried the number of guns noted by their official rate.  Certain types or sizes of guns, or guns in certain locations did not count, and the general practice was to equip a vessel with as many weapons as possible.
The typical Royal Navy thirty-eight gun frigate originally carried twenty-eight eighteen pounder guns on the upper gun deck and ten nine pounders on the quarterback and fo’c’sle for a total equal to their rated thirty-eight guns.  With the rising popularity of the light but powerful carronade, frigates began adding ten or so thirty-two pounder carronades to the existing armament.  Now carrying a total of forty-eight guns, these frigates were still rated as thirty-eights.  The carronades did not count.
( Collapse )
Logically, a larger vessel, with a larger crew, and more and larger guns should be the victor, but what happened when opponents were evenly matched?  Then the deciding factor was often which crew was better trained and more experienced.  USS Chesapeake and HMS Shannon were close to evenly matched in terms of armament.  Shannon's crew had been together for years, her captain placed a great deal of emphasis on gunnery, and even provided additional powder for practice from his own funds.  While he had had success earlier in the War Of 1812, James Lawrence had just assumed command of Chesapeake.  Many of her crew were also newly reported aboard.  Thus when she sailed from Boston on June 1, 1813, to accept the British challenge, it was with a crew and captain that had never operated together.  This lack of experience resulted in a British victory after just a few minutes of battle.
Collapse