Here's another review from the files of Spokane Authors and Self-Publishers.  (This is actually the second one as listed on the SASP web-site.  There is a slight difference in the way they are alphabetized on the web-site and in the working files.)
Angels Three Six
Confessions of a Cold War Fighter Pilot 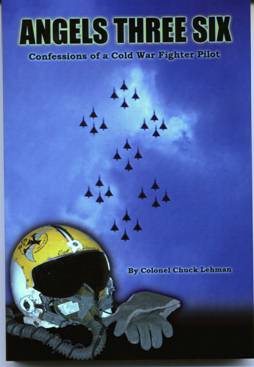 I grew up during the Cold War, aware of, but probably not fully cognizant of the dangers we all faced. As a grade school student I knew that the United States Air Force stood by, ready to defend this Nation and its people from Soviet aggression. My uncle was a SAC (Strategic Air Command) bomber pilot, and I could name and recognize many of the fighters that stood ready to meet any incoming threat. It was a time I thought, of unlimited numbers of aircraft, all with amazing performance and abilities, piloted by steely-eyed warriors, itching to be at any intruder.
In Angels Three Six, Col. Lehman, an ADC (Air Defense Command) fighter pilot, relates his adventures while serving in defense of the nation. Most of the stories do not deal with the horrors of possible nuclear war, but with the daily routine, the ever-present danger, and the sometimes humorous incidents of high performance military aviation. Reading his book causes one to realize that the pilots we look up to aren’t supermen, but human beings with the same failings and fears as the rest of us. Many of his tales are humbling, and he should be lauded for passing them on.
Having spent over two decades in Naval Aviation maintenance, I connected closely with many of the detailed accounts mentioned in the book. While there is always that inter service rivalry, Angels Three Six superbly shows us all what military aviation was all about. It is a must read for anyone who wants to experience and understand the Cold War era.
Angels Three Six, ISBN 0-9788507-9-3 was published in Spokane, Washington, by The Write Place. It is available for $19.95 + $3.00 S&H from CALCO, 13811 S. Finney St., Medical Lake, WA 99022.
Col. Lehman is also the author of Emergency Survival for $9.95 and Desert Survival Handbook for $7.95, both available from CALCO, each with an added $3.00 shipping and handling charge. He has also written a novel based on the exploits of his ancestors during the American Civil War.
(Since reading the book and writing this review, I understand the author has issued a newer revised edition, which I believe is from Spokane’s own Gray Dog Press.  Col. Lehman has also written a published several historical novels centered around events in the early Christian Era.)