Well, it's not quite a week since I posted a book review, but.... finished reading Jules Verne's Around the World in 80 Days a couple of days ago, and managed to get the following written last night.  My current read is Stretch-mark My Heart by Niki Breeser Tschirgi.  Its the story of her and her husband creating a family through adoption.  She is a local Spokane author who has spoken to Spokane Authors and Self-Publishers.  Her first book was Growing Up Alaska. 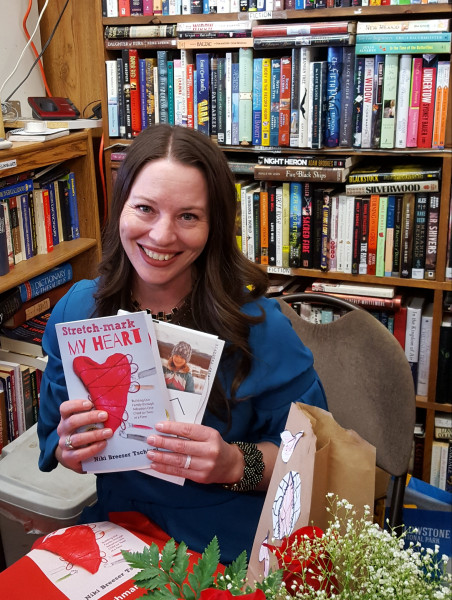 Niki at the Release Party for her new book!
Here then,
Around the World in 80 Days

In which the reviewer passes along impressions formed upon reading Verne's classic tale, of which he had been aware since childhood.  At that time he learned to play the theme song of the 50s film version on the accordion.  However, he only recently read it.
In Victorian London Phileas Fogg is a man of habit and precision.  He follows a precise schedule, never rushing, never arriving late or ahead of time.  He inexplicably makes what seems to be an impromptu wager, risking a considerable sum of money to prove one can journey around the world in only eighty days.  He sets off immediately, carrying a large sum of cash in a carpet bag, and accompanied by his newly engaged manservant, the Frenchman, Passepartout.
About the same time Fogg departs on his adventure, a mystery man robs a large sum from a well-known financial institution.  By chance, eyewitness descriptions of the culprit seem to match Phileas Fogg to the proverbial "T."  Detective Fix sets out to apprehend the adventurer, sure he is the bank robber, but is thwarted by delays in obtaining a warrant for Fogg's arrest.
As they progress around the world, Fogg and Passepartout contend with shipping and transportation schedules and the effects of natural events and manmade delays. Progressing through the story, the reader continuously wonders if Fogg, Passepartout, and later the Indian princess Aouda, will indeed complete the journey in London with in the specified eighty days.  And, is Phileas Fogg the bank robber?  While he might be seen as the central character, Fogg remains a mystery.  He is simply there, and the reader experiences the adventure through the eyes, thoughts, and feelings of the others.
Around The World in 80 Days is a pleasant, easy to read story that combines several genres.  It is in many respects, a travelogue, a detective mystery, and an examination of personalities and relationships. It is well crafted and a prime example of classic nineteenth century literature.

Another review from the SASP files in a few days!
Dave
Collapse