We had a bit of snow over the Holidays, but as last month progressed in to February, it slowly disappeared, a week or so we were having some unseasonably warm weather, with temperatures in the high fifties... almost shirtsleeve weather. But, as it is still winter, that was bound to change. We lost the influx of warmer air sweeping in from the south, and found instead the western edge of the current Artic Blast. Temperatures dropped to what is more normal for this time of year. And it brought with it considerable precipitation. It was just cold enough to alliw it to fall as snow. 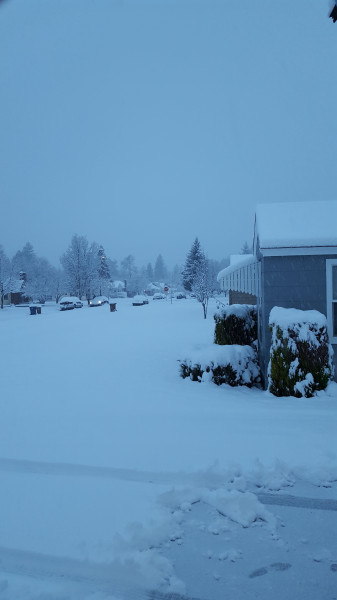 This is what we woke up to Wednesday morning... Valentine's Day. This particular photo was taken very early, around 7 am and so it is still somewhat dark. We learned later that within the local area, we set the record for the amount of snow falling on February 14th... over 7 inches!

Snow was pretty much stopped by noon and the cloudes began to scatter. By sunset, our skies were partially clear. 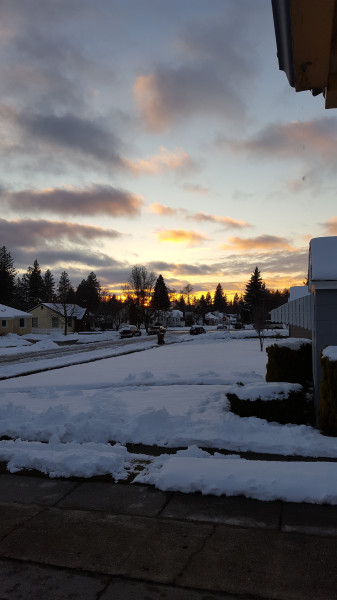 This was the view looking to the southwest at about 5 pm.

Today has been bright and sunny, although cold... got up to the freezig point and that was all. Weather guessers are saying a few more storms, rain or snow over the weekend, and then a few days of really cold weather... lows in the single digits.

Still, our cold spells are not what the hearty folks in Alaska face. Even so, over the past few days we were often showing about the same temperature as Fairbanks. No, weren't that cold... they were that warm.... mid 20s, and a time or two the were apparently a degree or two warmer.