Not sure if I've mentioned it or not, but last fall the motorized recliner chair that Eva and Jessica got me for my Birthday a couple of years ago stopped working.  It just locked up about 1/4 the way into the reclining position.  The leg rest had come up just a bit and the back had dropped down slightly... to where it was uncomfortable and awkward to sit in.  So we contacted the store it was purchased through and there was a warranty on it.  So they sent out a repairman... whom we waited for for several weeks, with the times they scheduled us for often conflicting with other aspects of our life.

Well the repair guy comes, takes a look at it and agrees that it isn't working.  His decision is to replace suspected parts and he leaves, saying he will order parts.  Well that apparently doesn't go good with the store, so we hear from them that we can either get a check from them for at least a part value of the chair, or we can replace it with a like unit.  With all the dilly dally and delays that go on in this age of instant communication, my new recliner, fully functioning, I might add, was delivered early yesterday afternoon.  And yes, I did use the recline function later in the evening while watching TV.  However, I think the most welcome feature was that I can now return it to its full upright position.  That's nice if I happen to be snacking or eating from the coffee table.  With the in-op chair, the position of the back didn't bother me at such times... it was the leg rest being partially extended that was a real pain in the...

As mentioned last time I was here, I'm currently reading Mark Twain's The Prince and The Pauper.  I've also been taking Coco out for regular walks for the past couple of weeks, and lately I've discovered a connection.  Not to provide any spoilers for anyone who hasn't read (or seen the old Disney film) The Prince and The Pauper, but the two named characters trade places.  The Prince ends up in rags and amongst the rabble of London.  He indignantly insists he is the prince but no one believes him.  As I walk Coco up the street, it seems as if he has much the same attitude.  I've noticed that he'll bark at places where other dogs have barked at him, much as if he's saying, "I'm the prince of the dog world!  You better sound off and let me know you're there!  Announce your fealty to me!"  Just something in that little dog walk and attitude.  He'll also bark at any pedestrians that happen by.... but that's because he's cute and knows it and wants attention.  I'll be taking him to the 5th of 6 puppy training classes in an hour or so.  He'll get his share of attention there.  Whether or not he learns anything remains to be seen.  Even so, he's a great little friend and the walks we go on are good for me as well.

I ended up sleeping in a couple mornings ago so didn't get a chance to see the Super/Blue/Blood Moon in person.  That evening, however, our sky was fairly clear and as the moon rose into the heavens, it was still quite bright and impressive.  Took the following pic from just in front of our porch, looking back somewhat towards the house and and along the row of houses stretching down the block. 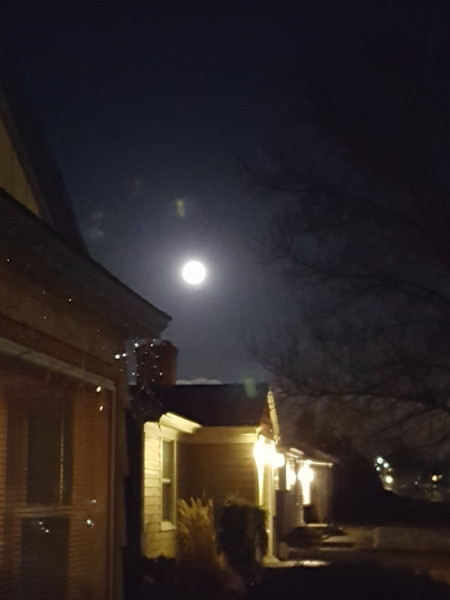 As always, more next time.  Getting close to the time to start getting ready to take Coco to class.
Dave
Collapse