So another week has gone by since I last posted anything. Sometimes I end up not posting with regularity because I'm doing stuff that keeps me from the computer. (And I'm not all that comfotable posting via my phone or tablet... as I'm doing now.) But over the past week I spent a great deal of time in the computer... working on stuff for the Spokane Authors and Self-Publishers' web-site. By the time I'd get done, I'd had enough of the computer for the day.

Had some really warm weather over the past couple of days... especially today. One weather service on my phone registered as much as 56° today. Another said 49° at the same time. This at the end of January when we usually expect snow and sub freezing temps. Nice, however when I'm trying to take Coco out for a walk every day. We went nearly every day last week and he's starting to enjoy and look forward to it. Surprisingly, while away from the house, he'll bark back at other dogs that bark at us walking by. I guess he doesn't realize he's basically out of his territory and in that of the other dog. Or it just might be that he's acting like the typical dachshund.... I understand they can have some rather unique personality traits.

He's been going to a puppy training class every Saturday, just completed his 4th week, and this is his 2nd time through... we figured he was a bit too young the first time through and the trainer offered to have him back again. I'm not sure he's learning anything this time either. He is too interested in the other puppies, their owners, the people watching the class over the wall, and the novelty of being away from home. But he so enjoys meeting people, especially children. Everybody thinks he is so cute and he knows it! Soe maybe he'll go through life on his good looks and charm, rather than being well trained.

Reading wise I finished The Sea Wolf a couple of days ago. Today I raided our downstairs book collection again and decided to read Mark Twain's The Prince and The Pauper. I remember watching the Disney movie version of the story decades ago so I have a basic idea of what it's about. I guess I'll find out if the film version followed the book fairly closely or not.

That's about it for now. More in a week or so.
Dave 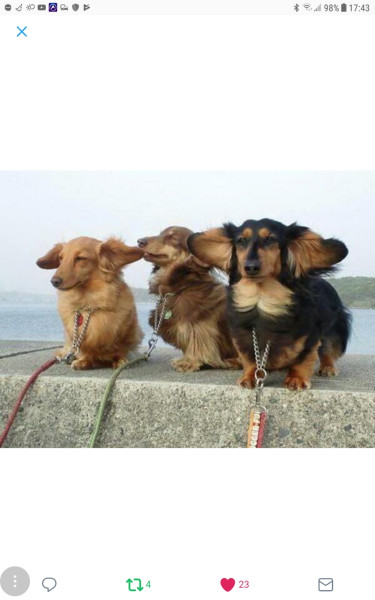 Snagged this off of Twitter. Captioned: "The Wind Beneath My Ears!" I see a lot of tweets with dachsunds in them, and they are usually really hilarious. 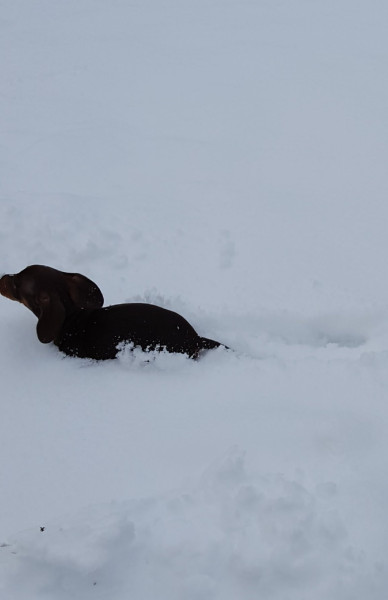 And one of Coco playing in the snow, back in the beginning of December.
Collapse