It seems like I just posted here, and yet a check of the calendar shows it to have been nearly a week.  In a way, I've been busy.  At the request of some of the other officers and board members of Spokane Authors and Self-Publishers, I've established an e-mail account for the group.  It's tied in to our web-site.  With the publication of our Anthology Celebrating Spokane Authors and the increased business needs that has created, we thought a dedicated e-mail account would be a good thing.  Now we don't have to have someone use his or her personal or individual business e-mail as a point of contact.  And it provides us with an e-address we can publicize in the event folks out there would like to get in touch with us.  All in all, I think it makes us look a little more professional.

I've spent quite a bit of time as of late creating and setting up "member web-pages for members of SASP.  In the past, a visitor to the web-site could go to "Members" and scroll down to a particular name, and if that person had submitted a bio, a click on the name would take the visitor to that bio.  If the visitor wanted info on that member's books, he/she would then have to go to the "Authors' Books" page and click on each book listed.  The member web-page combines the member's bio and info on all books by that member into a single web-page or document.  Plus that it lists links to any web-site, blog, or other on-line the member might have.  Member web-pages are accessable from the "Members" page.  (A member's books are listed to the right of the member's name.)  Eventually I envision the "Authors' Books" page as an archive of books by former members.  It'll simply be a list of member and book titles with no additional information about the books.

I'm keeping Book Reviews as a separate page, although I'm trying, and have to the greater extent, combined multiple reviews of the same book into a single web-page or document.  Hopefully all of this will make it easier for folks to navigate the web-site... and as well, make it easier for me to maintain.

It seems I've been so involved with working on the SASP web-site, as well as doing SASP NEWS and the REAR ENGINE REVIEW that I haven't bothered to update or do anything with my own web-site.  Until today, that is.  I updated the list of what I've read, adding in six new entries and of course deleting the oldest six on the list.  (I try to keep it to the last twenty-five books I've read.)  I didn't realize it until I was updating, but the last time I did anything on my site was way back in the middle of October.  I have a few book reviews to write in the near future, and hopefully I'll get them onto my site (as well as posting here) soon thereafter.  And of course, should any of those reviews be of books by members of Spokane Authors and Self-Publishers, they will go on that site as well.

Reading wise, I'm still working on The Sea Wolf by Jack London.  It seems to be one of those that I can't rush through.  It gets deep in places and I find I either skip over parts of it or have to force myself to slow down and read more carefully.  After so much of that I want to set it aside for awhile.  Still, it's an interesting and compelling story.  Like I mentioned last time, I think I've read it before, perhaps when I was still in school, but I don't remember much of the story or especially many of the details.  It may be that I started and found it a bit too much and thus never finished it.  I did the same thing with Moby Dick... started it several times before finally reading it all the way through.  That finally occured a few years ago.

Last Friday I took Coco to get his last puppy shots plus his first rabies innoculation.  Just amazes me as to how well behaved he is at the vets.  He's not scared at all, and seems to love everyone, even the doctor when she's giving him an injection.  It seems that he doesn't even notice.  Tanya and Tiffany would be nervous and anxious as soon as we would pull into the parking lot.  Saturday he went to his puppy obedience class again.  It's his second time through the class, as basically he flunked out last time.  But that was because he was just a bit too young for it.  And I've noticed his concentration isn' the best... he's more interested in the other puppies, the other people, and the folks watching the class from outside the little room we are in.  I've also determined that he's not really food motivated, which seems to be the primary training technique used.  Even at home he seems to be more toy, play, and affection oriented, so we try to use that in trying to train him. 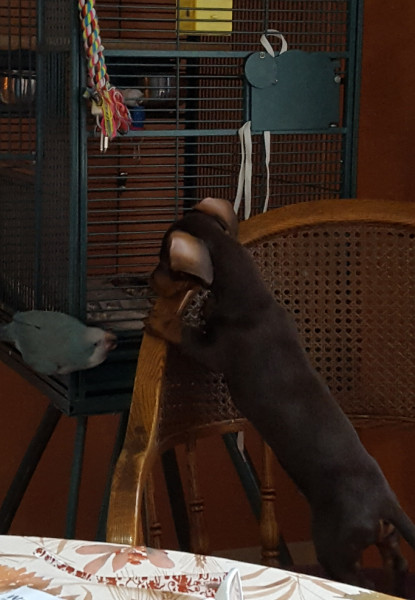 I can't recall if I've posted this here before or not, but it's one of the few I've managed to take which has both Stormie and Coco in it.  Coco is on one of the dining room chairs, face to face with Stormie, who is apparently telling him off for something.