Hey, a couple of weeks ago when I called to inventory copies of Beyond the Ocean's Edge at a local Hastings store, I was able to schedule another signing.  It'll be next Saturday... here's the flyer for it.
Join local author D. Andrew McChesney
for a Book Signing!
SATURDAY, NOVEMBER 23rd, 2 - 4 pm.
(Hastings, 15312 E. Sprague Ave, Veradale, WA) 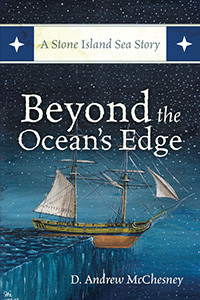 “The writing enthralls with its imaginative ingenuity, and tells a fascinating story that lends itself well to the fantasy adventure genre.  The crosscutting of scenes and shifting between viewpoints is cinematic in nature, and so this book would lend itself quite well to being filmed commercially.  The cast of characters, especially Pierce as he emerges to become the primary protagonist, are, individually and collectively, certainly strong enough to command center stage throughout the novel, and will successfully engage the reader’s interest in wanting to know what will happen next.  This is a really entertaining plot that could easily appeal to a wide audience.”
Judge, Writer’s Digest 21st Annual Self-Published Book Awards 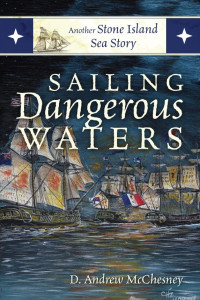 Master and Commander Edward Pierce, captain of HMS Island Expedition, languishes with his vessel and crew in a world both very like and unlike his own.  A voyage of exploration has led him further afield than he would ever have imagined possible.  As he works to convince the Tritonish Government that he is not a rebel pirate, Pierce is offered a unique opportunity to claim citizenship in this parallel world…but in doing so; will he breach his loyalty to King George III?  Not knowing whether he will be able to sail back to England, Pierce navigates the uncertain course of diplomacy that allows Stone Island to become an official Land of Vespica… and allows him to be released to sail for home.  But the voyage there is fraught with peril, and his welcome is uncertain.  What will the Admiralty make of his incredible tale?  And will Evangeline, his heart’s joy, still be waiting for him?  Richly characterized and deftly plotted, Sailing Dangerous Waters is a thrilling sequel to Beyond the Ocean’s Edge, offering the same meticulously researched nautical lore, and exquisite attention to details of period language and society. Readers will be enchanted, and eager for the forthcoming third book in the Stone Island Sea Story series.

Well, it didn't copy exactly as it was, but the gist of it is there.  If you happen to be in the Spokane area or know of somebody who will be, let them know and stop on by.
Dave
Collapse