After last weekend's rain, the clear skies and sunshine we are experiencing this Saturday and Sunday are most welcome.  Temperature wise, it is definitely fall.  For the past several days I've had to clean the condensation off my car windows before heading to work.  Friday, I actually had to scrape ice off the windshield.  (I have a small squeegee that I use to clean the moisture, but it wouldn't even touch the thin but stubborn layer of frozen dew.)  It wasn't frost in the usual sense, looked the same as on the other windows. but was solid as can be.

For the past few years one of the members of the Inland Northwest Corvair Club has hosted what he terms as Cider Fest.  He has a place north of Spokane and invites club members, neighbors, and others to come by for a car show, a potluck/buffet, wine tasting, micro brew sampling, etc.  When my Rampside (Corvair) pick up was running, I'd take it for the display, along with a gallon jug in which to bring home some fresh squeezed apple cider.  The last two years I've gone in the everyday vehicle, and I've also carried a few copies of my book with me.  Last year I ended up selling one copy.  This year it seemed that a few folks were interested, but no takers.  Maybe a few saw the little sign and display I had in the corner and picked up a card.  There is always the possibility of future sales generated by an event that does not produce any.

I can't provide any sort of progress report regarding Sailing Dangerous Waters.  It's in progress, and soon I expect I'll be getting back the edits to go over.  I'm now in the "sit back and relax" mode, letting the folks at Outskirts Press work their magic.  Basically, "no news is good news," but sometimes I'd like a bit of word as to just what is going on.  Yet, if they have to send out routine progress reports for all the authors they work with, the process for all would slow down.

Friday at work (on my lunch hour) I finished reading Crucible of Gold by Naomi Novik.  It took me a bit to get into the story, even though I'd read all the previous ones.  For a while I had the feeling that she had overdone the effort of trying to have it sound as if it had been written two hundred years ago.  I found it difficult to follow until my mind adapted to the voice and cadence of the narration.  Once I got into it, I found the time I had each day to read to be too short.  As always in reading these stories of Temeraire, I find the personality of the dragons to be the most interesting factor.  At times they seem so wise, and at others like spoiled children.

Last weekend I started work on one final painting.  I'm simply attempting to use up all the canvas panels I had purchased for painting the cover of Sailing Dangerous Waters.  I'm attempting to paint Natividad vs Lydia from Beat to Quarters (The Happy Return) by C. S. Forester.  Last week I got Natividad painted and in the picture, even though I had to paint over and redo the hull.  On my first attempt I got the gun ports too big and too few in number.  Last night I worked at adding Lydia to the scene.  Again it looks like I'll need to do some re-work on the hull.  And try as I might, I can't help but make every frigate I paint, especially from the angle I'm using here, look a bit like USS Constitution.  Well, maybe later today or during the week I'll work at cleaning up Lydia's hull, and maybe I'll have finished picture pretty soon.

Almost time to get off the computer.  The Sea Hawks' game starts in a bit.  After that, if I'm ambitious, I'll go out and trim around the yard.  Mowed yesterday, so today I can trim.  I might also trim the shrubs back a bit... again it depends upon how ambitious I am.

If anyone has noticed the snapshot that I use as my "author photo" in various places, including the back of hard copies of Beyond the Ocean's Edge, you may have noticed that I'm in front of a painting of a frigate.  Yes, the painting is one I did, many years ago, and is of the USS Constitution.  I've often thought about taking it out of the frame and running it through the scanner.  The problem, it's bigger than the scanner, so I'd have to make several scans and then try and piece them together into a composite picture.  (Alternately, one could print out each scanned section and have sort of a montage, like looking through the window.)

But my brain went into high gear a while ago, and I decided why not snap a pic of it with the camera phone.  Not all that high quality, but at least you can see the entire pic.  It's sort of based on one that was around years ago, sort of as a recruiting poster.  I'd just returned from work ups or a deployment aboard Forrestal, which can be seen entering Harbor on the right hand horizon.  I'm thinking this was in 86 or 87.
Dave 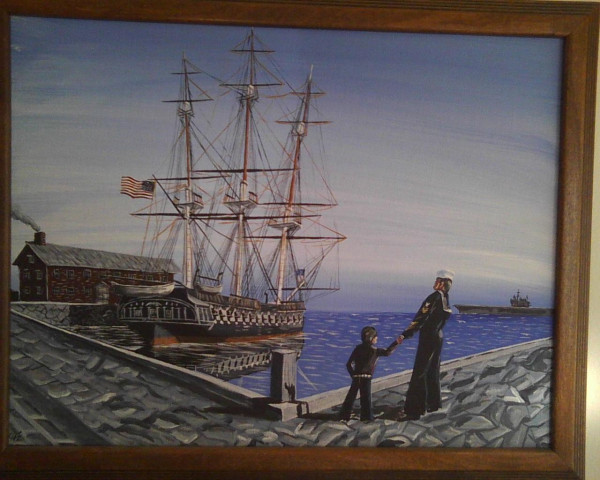 Obviously I wasn't "square to the painting when I snapped it.
Collapse