Quite often we see marketing or selling something (such as books) as a deliberate campaign, a process painstakingly laid out in advance.  It doesn't always work that way.

We are currently investigating a re-finance of our mortgage, and yesterday morning had a phone conversation with an individual we are working with, located in another state.  In a bit of preliminary and general conversation, she asked what I had planned for my Saturday. I indicated that I had a book signing scheduled for later in the afternoon.  Of course, that lead her to ask about my writing, what I wrote, and so on.  As I would later be e-mailing her some information about our current mortgage, I told her that my "e-mail signature" would have some information about my book.  Later I got a reply from her in which she seemed interested in buying a copy.  Nothing at all planned in this... it just came up in conversation, and presumably I've sold another one.

During yesterday's book signing event, I ended up selling another book.  This also happened quite by accident.  A store customer was browsing shelves next to my signing table and nearly stumbled into it.  She excused herself and said something about looking for something good to read.  I mentioned that she might consider what was on the table.  She looked, considered, and asked me to sign a copy for her.

Truth is, is I were a real pushy type, I could probably sell more at these signings and other events.  However I am not an "in your face", "twist your arm" sort of person.  I think I'd feel bad to think a person bought my book to get me to leave them alone, rather than buying it because they decided they might want to read it.

Signings for me at least, consist mainly of a couple of hours of people watching, spotted here and there with brief moments of conversation about the book or writing in general, and perhaps highlighted by the occasional purchase.  One highlight from yesterday's event was that my wife happened by... the first time she's come by a signing event, and took a few photos.  It's on my Facebook page, and if I can I'll post it here as well.  You can tell that I'm not yet a famous author... no line of people anxious to get a signed copy.  Someday, maybe.
Dave 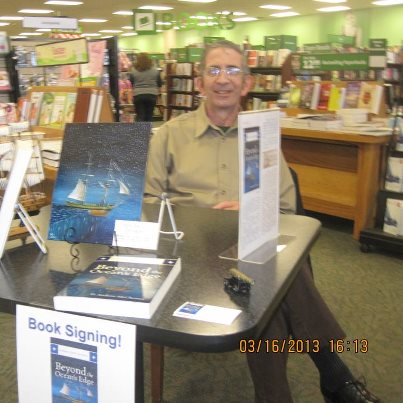 Small cannon on fore corner of table is one of two I bought at USS Constitution Museum in 2005.  That's the original "Hotchkiss Paradox" propped up in the center.

Still reading Ship of Magic by Robin Hobb.  I'm totally immersed in it for a half hour a day.  In a way, I don't want to reach the end, although I realize that I will... and that there are two more volumes in the trilogy.
Dave
Collapse